I apparently missed all the radical cloud action Tuesday while I was having an MRI, which time I spent trying to decide what symbols to put in my Drawing I project, and what I might take to a Thanksgiving thing, if I went. I try not to whine on about the diabetes, because I’m determined that it should only make me feel bad physically and not attitudinally. But autumn is my season, and Halloween and Thanksgiving are–maybe were–my holidays. Also Memorial Day, but that isn’t really screwed up in the same way as Halloween and Thanksgiving, not being so much about candy and food in general.

I’m not a big candy eater, apart from the occasional PMS chocolate, or taffy. And I found both in quite delicious sugar free versions. (Although the sugar free salt-water taffy can not compete with the Laffy variety, nuh uh. It is actually good though, and not just meh, it’ll do. But there aren’t any sugar-free peanut butter kisses, or air heads, or any of the silly crap I normally indulge in this time of year. The idea of passing out candy I must not touch myself just bums me on a collosal scale. As for Thanksgiving? Its approach has made me realize I have to cooking identity anymore. Sure I can whip out a ham that falls apart at the approach of a fork, but baking has always been my thing. Like with the candy, my heart is not in baking pies and cobblers and jelly rolls and upside down cakes and puddings that I can’t have any of.

My non-dessert specialties are lasagna and chili, neither of which are all that appropriate for a Thanksgiving thing.

On a Thankful Thursday note, I am grateful for sugar-free Hershey’s Special Dark, and that the MRI is over. I wish I had seen the clouds. Yeah, there’s some self-pity going on.

Let’s ignore it and see if it goes away.

I bought a Nook Color, and I’ve been browsing the free books on Barnes and Noble’s site. It seems I have an inner agent…an underdeveloped inner agent, but she’s there, nonetheless, and I would like to find treasure in the self-published trash heap. This means sifting through a lot of trash. Some things that lure me to click through to the book description: the word dog or wolf in the title. Zombies. Lots of ratings (say more than 20) of three or more stars. A completely unexpected word in the title, case in point: Wendigo.

Things that just tick me off: When the wolf in the title is a werewolf. Vampires, period. How much self-pubbed vampire dreck does the world need? (In fairness, I am thoroughly sick of vampire non-dreck, and have been since Lestat became a rock star, barf.) A description that tells me nothing about what the book is about. A description with really atrocious lack of writing skills, by which I mean tense problems, grammar issues, spelling errors. When the author’s name is huge and the book title is small and unreadable on the cover thumbnail; if your name is Stephen King this works. If you’re Ann Smith, no. Actually I find it off-putting if I can’t see the title on the cover for any reason. I get that self-published authors can’t afford top-end graphic design, but making sure the title looks good should be a no-brainer. You collect enough of these strikes together in one place and it won’t matter if your book is Zombie Dogs in Wendigoland. I’m only human.

More tick-offs include when all the reviews say the same thing, which to nothing, and thus scream SOCK PUPPET. A couple of less-than-perfect reviews/ratings make the whole deal seem more legitimate to me.

Lots of these tales are really quite very much bad, but that’s ok. The people that wrote them don’t know they’re bad, and maybe someone else will like them. Meanwhile I will hunt on…in between school projects, one of which I should be working on right this second. ‘Til next time.

I bought Cobie and Kelly this Kong Ballistic: 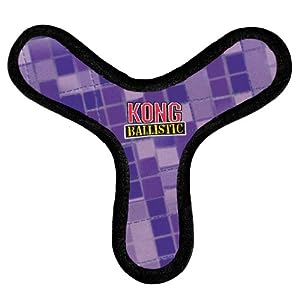 (I didn’t get mine from Amazon, I got it from Jack’s. I was in there buying the equipment to set up a new bin for the hamster males, which product has stalled due to my inability to tell the boys from the girls. Unless they’re all girls… But anyway.)

Ok, this boomerang-type toy made of cloth, and it’s big enough for the big dog to play with no risk of choking, and small enough for the small dog to manipulate it easily. It’s soft enough to play fetch in the house without destroying things or hurting a dog who gets in the way of it. It’s heavy enough to fly the entire length of the hall (and into the office.) There’s room for two dogs to hold on at once for tug purposes, or to carry it back to me, at which time there’s a third “handle” for me to take hold of with minimal risk of having my hand accidentally CHOMPED.

There’s a squeaker inside each pod. It also allegedly floats and is washable; I’m not sure how that combination works out, but I bet if I throw it in with a load of towels it’ll get clean. It does come in other patterns/colors, but I just like purple.

Now here’s the part I consider SERIOUSLY COOL: It’s made in three layers. Two of them are ballistic nylon, meaning it’s made with the same technology they use to make bulletproof vests.

Bulletproof or no, I’m not letting them chew on it, because I paid a good bit for it (about $15, as I recall) and I want it to last…and it seems like it will. Kelly tried a couple of times to pack it off and rip its squeakers out, and to no avail. I have high hopes, and I had a blast playing with them. They haven’t had any indoor toys in a while because of their tendency to destroy everything in two days max.

The only downside I’ve discovered so far is that after a few rounds of fetch/chase/CHOMP, it gets wet and kind of icky feeling, but hey. It’s a dog toy. When you have dogs, the occasional wet and icky is part of the package.

We took the last in-nest Spawn to Best Buy to pick out her new laptop. She’s been shopping online for months, and new exactly which one she wanted. Except when we got there, they were sold out. She carefully inspected every other offering in the store, most of which were also sold out. “I just don’t want to settle!” she cried in frustration.

And, since Mr Moth and I agreed she shouldn’t have to settle, we drove her to the next town, which has a bigger Best Buy (glorious, glorious geekery…provided you don’t actually expect their commission-based geeks to fix anything) and found her laptop. She was walking out with it clutched to her chest and a big goofy grin on her face, and she said, “Hey look!”

Ok, so New Laptop Face isn’t as creepy as Pudding Face, but you get the idea.

I dreamed last night that Lita had more babies, and they escaped. I am thankful neither of those things is true, although I did come right in and wake them all up for a head count.

I am thankful for Goodreads, because although I don’t use the social networking aspect of it, I’ve been keeping lists of books I’ve read since I was ten or so, and I love being able to keep track them in a place where I won’t lose the paper. I also love how simple it is to add the books I’d like to read. And if I get busy and ignore Goodreads for awhile, it’s still there waiting for me when I catch my breath.

The opportunity to get a (mostly) free education. We normally don’t qualify for things, because we aren’t living at poverty level. But there’s no way I could afford to go back to school if not for help from the government, and neither could Zor.

Still on that same subject, today is Tolesday–Mr Toles being the instructor of my favorite class.

Fall. O, how I adore Fall, and we seem to actually be having one. The heat is over and the snow isn’t here yet. Yay!

And lastly, I’m thankful for an auxiliary character that popped into my head during Contemporary American Business. This guy suits Seldom’s story so much better than the cardboard guy I had planned for that job; he serves multiple functions. The Maasster would be proud.

This is Lita with two of her pups, who turned two weeks old early Friday, in the chow hall of their new tub house. That’s actually Oliver’s old cat dish. But I was thinking how hamsters like to sit in the dish while they eat, and I figured a big ol’ dish would keep that from being a problem in a mulitple rodent situation. Also, Lita’s not apt to get nervous about the food supply if she has a ton of it.

At last count, on Moving Day, there are six remaining pups, out of eight. Two are runty. One T-Moth has called Speedy, because it’s always zooming around, always on the wheel. The other I am calling Algernon, because honestly I believe it’s developmentally impaired. It can walk, and eat, and all that…but it rarely walks, and I rarely see it. I almost removed it from the cage a week ago because it was so lethargic, I thought it was dead. But when I petted it, it blinked. I hurried and put it back, sure it would die because I had touched it too soon, but when I moved them to the tub, Algernon was still with us.

If s/he lives, I’m keeping that one.

It feels wrong to have hamsters living in a tub, but I didn’t want the pups squeezing out through the bars, and I understand breeders often keep them in tubs. In fact, the woman from whom I got Zandy and Lita had them in a tub. I like the free-standing wheel, and that I can just reach in and remove it for cleaning. That’s only one day of hamster mess in the video!

The water tower is a combination of an idea I had, and T-Moth’s misunderstanding of that idea. I really like it, but the hole needs to be up about another ince to keep the bedding from wicking away water. I used one of those side-cut can openers, so there are no sharp edges.

I’m not wild about the brown bedding in combination with the brown-and-gray critters, but it came free with Zandy’s cage, so you know I’m not going to waste it.

They sure got big fast.