Cera Murphy lives in a blighted future, an hour outside diseased New City with its belching crematoriums.  She needs money to buy food and fuel, plus Lithium for her only companion, half-crazy Muriel.  To achieve this, Cera has no compunction about selling an illegal cemetery plot to the neighbors, even if they do believe she murdered her deputy husband seven years before.

A sinkhole opens on her property, a mere inconvenience, until monstrous creatures emerge and crash the funeral.  One carries off Muriel.  Another stalks Cera, drawing her to it and draining her strength whenever she moves too far away.

When she finally faces the creature, a future incarnation of herself, Cera receives a talent some will call Godlight, the ability to facilitate touch healing between a physician and a patient.  Muriel also receives a gift, but of a very different sort.  Deadly energy courses along her unstable neural pathways, but Cera will surely interfere with the freedom this sudden power provides, just as she has always interfered with Muriel’s best plans.

More alone than ever due to changes the talent has worked on her body, Cera must choose whether to wash her hands of the same humanity that has so often washed its hands of her, or to stop Muriel, even if this means finally becoming the killer many already believe she is.

Godight is a 100k word novel of dystopian fiction, and it is the first story I’ve written that might be good enough to publish. Currently it’s making the rounds to agents, to whom I would be more than happy to provide a query, synopsis, or sample pages upon request. 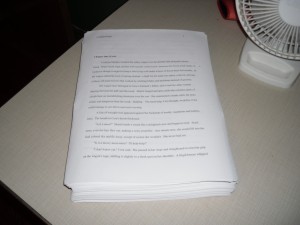