I have a spotty employment history, due to my previous stalking situation and the PTSD and anxiety that goes with it. I spent a lot of time working in the pizza delivery field. (1) They forgave me a lot of quits, (2) being on the move made me feel safer, and (3) when Stalker found me (and he did…a lot) I could just move on to another store, another company, another map.

So there was this one time when I went back to work at one of my favorite stores. My first night, almost as soon as I walked in the door, someone I had worked with before, A, pulled me off to the side and said, paraphrased, I’m so glad you’re back. I’m the only one who cleans under the makeline.

This is the makeline, that big refrigerated silver table with all the food:

It gets pretty gross under there, with cheese and flour and bits of dropped food. Nothing a good sweeping and a thorough mopping won’t take care of though. It’s heavy and awkward and there isn’t much room

So I nodded and went on about my business, and later in the night another person with whom I had worked before caught me near the dispatch table and said, paraphrasing, I’m so glad you’re back. I’m the only one around here who ever cleans under the makeline.

Ok. So whoever was supposed to be closing driver that night realized I was there and they could skate outta there and did so, and so I found myself pulling out the makeline to clean under it because I never want to be part of the problem, and especially not on my first night back. I didn’t expect it to be too bad under there; after all if both A and J were cleaning under there occasionally, how bad could it be?

Bad. There was this…splotch. Black, tarry, furry around the edges, and with King Tut’s chicken wing stuck right near the edge of it at about the two o’clock position, which ironically, was about the time of the morning it was when I found it. I have never seen anything so gross in all my years of pizza. While the stores do get trashed during the dinner rush, that is only mess, not actual filth, and I have never been hesitant to eat at any of the stores where I have worked…including the one I am talking about now.

I don’t really want to talk bad about my co-workers either. I’m sure they thought they really were bearing more than their fair share of the burden.

In order to clean the splotch, I had to get an old dough scraper, which is something like a huge putty knife, and chisel that chicken wing up out of the goo, soak the tarry residue with dish soap for an hour, and mop it repeatedly. It finally sort of went away,mostly, although it left a stain that faded over a course of months. And every time I saw that stain I thought about how everybody thinks s/he is the only one who cleans under the makeline. Which brings me to what I want to say.

You probably aren’t, so stoppit.

I promised to tell this story years upon years ago, and it’s shameful that I haven’t done so, because it’s such a short story.

It was early spring, but warm, and I was on my way to college (the first round) and had come off the interstate and was waiting on the traffic light at the bottom of the offramp.  There was a straggly little tree to my left, but it was far and farther in the leafing process than any other tree, I noticed.  But whoa!  They were not leaves at all, but robins! And instead of one or a pair like you normally see in Ohio in the early spring, there were scads!  I started counting them.

I’d got to fifteen or so when the blare of a car horn made me jump, and I scowled in my rearview before returning my attention to the light, which had changed.  Sorry, jerk–I was busy counting robins! I thought, and the signal headed from my brain to my foot, to move from the brake to the accelerator, when a pale yellow Cadillac El Dorado blew that light doing about sixty.  I barely registered that the driver was a cliched pimp, or at least someone who played one on TV, wearing a raked over hat with a feather and some kind of a coat with a fur collar.

That was not the nearest I ever came to death; I have also been saved by a book, by doctors, and by my own wits, but on that day in 1984, a flock of robins get the credit. 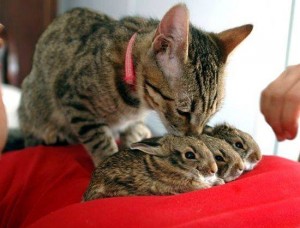 Once upon a time, when we were kids, a big mean tomcat adopted us and moved into our apartment.  But this is not about Harry; it is about the tiger cat Mom got for us after Harry passed away.  I named her Zephyr, but we all ended up calling her Zee.

Keep in mind this was back in the days before people knew quite everything, and were not quite so free with their harping.  Nobody lectured you about what a horrible person you were if your dog or your cat went outside (unless the dog was mean) and nobody got on message boards and expressed moral outrage because somebody dared feed their pets Purina.

Zee was a big kitten, and half wild.  She’d been fending for herself at the greenhouse around the corner where she had presumably been dumped.  She was also already pregnant.  I was holding her when her water broke.  A short couple of hours later she had given birth to three kittens, and we couldn’t keep the fleas off them.  Back then there were flea collars and flea powder and flea spray, but you couldn’t use any of it on kittens.  The vet said to wrap a flea collar in a towel and put it in the nursery nest, but she kept moving them from place to place.  The kittens didn’t live long.  We had Zee spayed right away.

(I think of those kittens whenever I frontline our animals, and I wonder if there are better ways to protect newborn critters now.)

She never quite got over it, and spent every spring for the rest of her life hunting baby rabbits from the litters born under the neighbor’s shed.  Not to kill.  To adopt.

Thing is, a wild baby rabbit doesn’t want to be adopted by a predator.  They scream.  And scream.  It’s horrible to hear, at least for humans.  We’d make her turn them loose and put them back by the shed so they could get under cover.

Ordinarily a rabbit maybe gets a chance to scream once, and then the predator finishes them off.  There is nothing quite like the sound of a baby rabbit screaming it’s death scream in a tree…and it goes on and on and on, because Zee isn’t trying to kill it, although she killed several that way when she either dropped them or fell during an escape attempt.

This photo is probably a tame kitty and tame bunnies.  The bunnies are probably not terrified.

But I wonder.  Because sometimes I can still hear those bunnies screaming.