I suspected a raccoon, mostly because I didn’t think cats, squirrels, or possums could pry the lids off food-grade five gallon buckets of dog kibble that I can’t even get the lids off of half the time, and also because I’ve actually seen neighbor cats in the garage. (And once in the kitchen.) But I never heard any cat noises, not even when Kelly got hurt.

Adding to the doubt is the fact that none of us have ever seen a single ‘coon in this neighborhood in the going-on six years we’ve lived here. (Nor a ‘possum for that matter.) We smell skunks quite often, to the point that I call this neighborhood Skunkridge at times.

Adding to the fun of this week (which events included my accidental overdose on my medication, due to which I am still feeling like death in a bag) was that our visitor, the WhateverItIs, had gone from the garage to the attic, and possibly into the walls. The dogs would just randomly start barking at the walls, or racing through the house whining at the ceiling. And Kelly’s bark would be that full on terrier YARK that people–including me–hate, like a railroad spike through the head, possibly more so when you’ve poisoned yourself with diabetes pills.

I started to worry, because there’s this one wall behind the tub that Artemis the Ckatten got into, and followed it down into the basement’s drop ceiling, crashed through, and landed amid an avalanche of ceiling material, on Mr Moth while he was doing homework. So in between trying to do my (hideous, kill me now) video assignment–not so easy when [a] all the neighbors are using their leaf blowers right up until they put them away and then get out their snow blowers, and [b] dogs are breaking out into random barking sprees, and [c] you’ve poisoned yourself and can’t breathe.

We really didn’t want the WhateverItIs in the house.

Mr Moth asked me if I had any suggestions and I suggested a box trap, and he said he didn’t know where to get one, and I said I didn’t either, and then he thought of Tractor Supply Company, which I always call Quality Farm and Fleet because once your company name is registered in my brain it will never be changed, I’m looking at you too Revco and Lawson’s. So he went and got a trap and we baited it with Oliver’s slightly crusty gooshy fudz leftover from morning. Mr Moth somehow finagled the whole thing into the attic entrance (it’s not a real attic, more of an access space).

We also had some discussion about how, if he didn’t catch anything, he would dis-arm the trap before he went to bed because we didn’t want anything caught for a long period of time out there with no water and it’s ten degrees, ugh. Also he was pretty sure we were trapping a cat. I was pretty sure we weren’t. But neither of us was completely certain.

Forty-five minutes after trap deployment, Kelly YARKed so I got up and went to the door, opened it, and then heard the trap close. I hollered, “You got something!”

It took some wrestling to get the thing out of the attick, but this is what we caught: 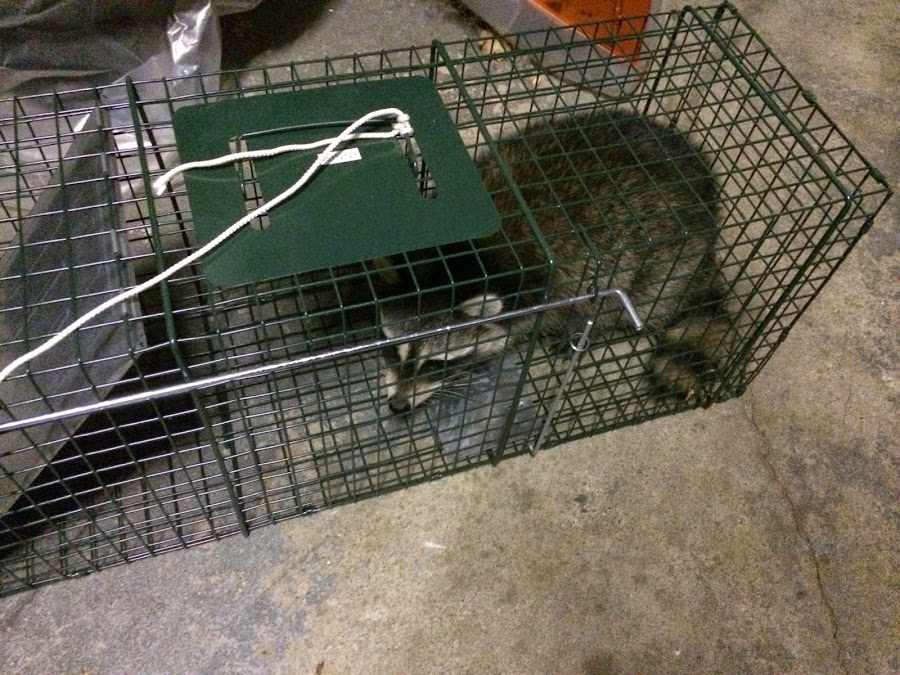 Some time ago Cobie caught a turtle in the yard and I took it out to a pond I know of and let it go, and to my surprise the turtle made an about face and hauled ass away from the pond and toward the tree line. Mr Moth took this critter out there and turned it loose and it streaked away across the frozen water. I think–I hope–it is a good place for raccoons, I see a lot of road killed ones there, but I think that is more a factor of the booming population than that the road is particularly bad. There’s water, and trees, and hopefully this ‘coon can make a living there.

However, I am not a huge fan of raccoons, and this one is presumably the varmint that hurt Kelly to the point she had a seizure. I realize she would have killed him/her if she could, so no hard feelings, but yanno…you hurt my dog and you ain’t even paying rent, so Mr/Ms Raccoon, you gotta go.

It looks bigger in the photo than it is. It was actually about Kelly-sized, and she weighs about 20 pounds.

Last night was the first night in I forget how long I didn’t get awaked by dogs barking at something in the ceiling, so hopefully this was the only squatter.