Or, how I spent my morning instead of writing.

First, take two Kongs, one per dog.  Block up the small ends with little pieces of Slim Jims that I keep frozen for just such usage.  Then fill them with a layer of peanutbutter and a layer of not-the-usual kibble.  I’m presently using some Beneful I got on sale.  It’s easier to stsuff them with the Kongs propped upright.  I use coffee mugs.  They’re the perfect size.

Next, microwave them, still in the cups.  Cobie and Kelly watched this procedure anxiously.  Kelly got herself all in a blur. I did the black Kongfor a minute, because black heats up faster, and the blue one for a minute and a half.  When they came out, they looked like this:

I topped them up with more peanut butter and popped them in the freezer.  They’ll last much longer when the melty peanut butter hardens, and I like them to last.  To stave off disappointment in the meanwhile, I offered up the spoon: 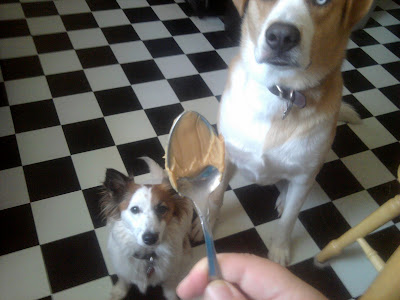 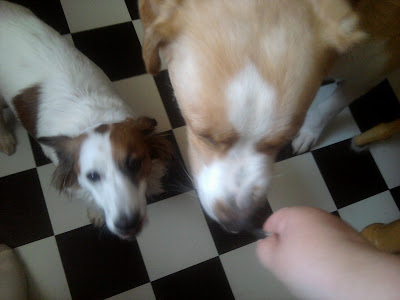 And since Cobie was being a greedo–surely not because I accidentally cut off the top of his head in the last shot–and was crowding out Kelly, I put the camera (my phone) down and gave her some peanut butter on my finger.

I did write later…or actually, outlined.  Outlining is not writing, but it has to be done, at least by me.  Between outlining and typing this, I’ve reached lunchtime, so I’m off to find some noms.