Something has been getting into our garage.

The way the house is laid out, there is no door leading directly from the house to the back yard, so the dogs go in and out through the garage. I don’t like the arrangement much, but on the other hand, it creates a kind of safety valve, an airlock but for dogs–doglock. But I am lazy (not to mention lately also dizzy) and so when I am home and awake (and sometimes not awake) the man door stays open so I can just open the door from the kitchen to the garage and the dogs can charge out gaily and terrorize their back yard. This saves me having to traipse out there in my house shoes or bare feet to open the man door.

But something has been getting into our garage.

At one point I knew the neighbor’s cat was getting in out there, because I saw it. It had climbed Berta (the van) and was lurking in the rafters out there. In fact, here. Have a photo. 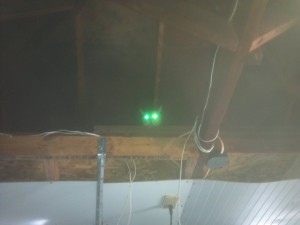 But lately something has been getting into our garage and tipping over five gallon buckets full of dog food. Those things are heavy. And whatever it is has removed impossible-to-remove lids on at least two occasions and made a huge mess, forcing us to relocate the dog food to the workshop, where so far it has remained unmolested.

Wish I could say the same for Kelly.

They hear whatever it is, and go crazy. I try to warn WhateverItIs before I let them out, and give it time to take shelter, but a few weeks ago it didn’t move fast enough. Maybe it thought I was kidding. But for whatever reason, it didn’t, and apparently Cobie and Kelly caught it, cornered it, or something, and all hell broke loose in my garage.

It was roughly one a.m., of course.

There ensued all kinds of yelping and squealing and barking and nails scrabbling on cement, but no noises that sounded like they might come from WhateverItIs. In short order the noises all rushed outside. At first I figured WhateverItIs had escaped, but minutes ticked by and the dogs fell silent and I started to think they had killed it, WhateverItIs.

Then I had to get shoes on, because, oh did I forget to mention, it was storming. Sheets of rain, and huge flashes of lightning in both sheets and bolts, and window rattling thunder. This is why we were still up in wee hours. Kelly is terrified of storms and had been shivering between my feet. Now she was out in her worst fear.

So I put on shoes and went out, and as soon as I got to the deck started slipping because damn that thing is slippery when wet. I have no idea if all wood decks are like that, or if it’s just ours, but regardless, yeah–treacherous. Worse, I couldn’t see. The lightning was blinding, and my eyes couldn’t adjust fast enough between flashes to actually see much.

And then, in between cracks of thunder, here came Kelly, charging toward me out of the dark. “Come on!” I cheered, and skated back into the house. She followed.

In the light, I saw her face. Her right eye was full of blood. I reached for her.

She ran past me and down the hall, threw herself down, staggered, hopped sideways, fell over, yelped, stood, hopped, fell over, began crying, got up, tore past me, fell over by the sofa, and started seizing.

The storm raged outside (where Cobie still was, doing heaven knows what) and in, and I screeched for Tim to wake up and come help me, although help with what, I had no idea. I was not able to think or move or do anything but stare in horror.

By the time Tim got out of bed, the seizure was over. Kelly hopped up on the sofa and wiped her bloody face on the spread there. She panted and panted, and I collapsed next to her, I didn’t touch her because I didn’t want to make things worse. After she cleared the blood from her eye she came and lay next to me.

Somehow, Tim got Cobie to come in. Zor came out to see why I was shrieking. I was able to inspect her and see that her eye was ok, just the blood from the scratch on her face had got into it. We debated the necessity of a middle-of-the-night emergency vet visit.

Kelly has never shown any signs of any neurological problems before. She’s a little high strung, but not really that much considering she’s a terrier and all. She’s already up on her shots, and her annual is coming up soon anyway. I remember the little dog Trickie Woo from the Herriott novels that would get so wound up he would have a “fit”, so it’s a thing.

So I put some neosporin on her, and called the vet in the morning. Barring a whole lot of expensive tests that might not show anything, there isn’t anything to be done at this point, except to worry obsessively, which of course I began at once.

I think she was already wound up about the storm, and then the WhateverItIs, and then blood got in her eye and partly blinded her, and it was all just too much. At least I hope that’s what it was. She has been completely normal ever since. Well, KellyNormal. Her poor face was a little puffy for a couple of days (but not hot, so no infection) and there’s a scab, which I want to go away right now because it hurts me to look at it. It makes me feel like a scared six-year-old:  Get offa my Kelly Doll, you bad ol’ scab!!!

So. We are all keeping an eye on Whee Kelly, and she has been a hundred percent KellyNormal. Which is good, because she is, well…my sunshine? My heart? My light? My joy?  She’s my dog.

Which pretty much sums up everything about her, as far as I’m concerned.