In my living room there are a phone-and-lamp stand, a coffee table, and two end tables.  One of the end tables sits just inside the mural window, and there is nothing on it.  It’s deliberately cleared and positioned so Oliver (the cat) can look out the window, but Kelly uses it too, and I’m ok with that.  Cobie can stand on the floor and look out, or sit on the sofa, but Kelly likes to see out too, and she is vertically challenged.

On the other end table is a second lamp and a pewter coaster.  It’s where I usually sit my drink when I’m watching tv or folding laundry.  And presently there are two chew-bones there.

Whenever one of us leaves and returns, Cobie greets us with one of the three bones the dogs share.  When we had two bones, there were often alarming-sounding battles over who owned all the bones (looking at you, greedy Kelly) and I used to have to store them on top of the refrigerator and only bring them down when I could supervise.  Then T-Moth found an identical bone lost in sofa during Cobie’s puppyhood, and then there were three.  Magically, the competition evaporated.  Kelly could hog up two bones and have more than Cobie, and Cobie doesn’t care if she has more, as long as he can have one.  Heck, half the time he doesn’t even want one; I think he just likes to have it because he can.

Anyhow, when we return he greets us with a bone.  He full-butt wags, and winds around us, grinning around one of the chew-bones, teasing us with it.  Then, after a few moments, we’re supposed to take the bone and pretend to nom on it, then give it back, whereupon he abandons it somewhere until next time.

However, a lot of times when I come home my old lady bladder is at the bursting point and I can’t play Bone with Cobie.  Often he follows me into the bathroom and we play the game there while I relieve myself, but other times, presumably when his bladder has also had an–ahem–full day, he goes right outside, like as not taking the bone with him.  Then I go find it, because I don’t want to lose one and be back to the whole squabbling over two bones deal.

One day I brought one in and set it on the end table.  It sat there for weeks.  No dog touched it, although in that same time period Kelly stole the drinking straws out of several of my beverages.  And maybe this is pertinent; I think it is.  Kelly steals the straws, and then Cobie takes them from her. 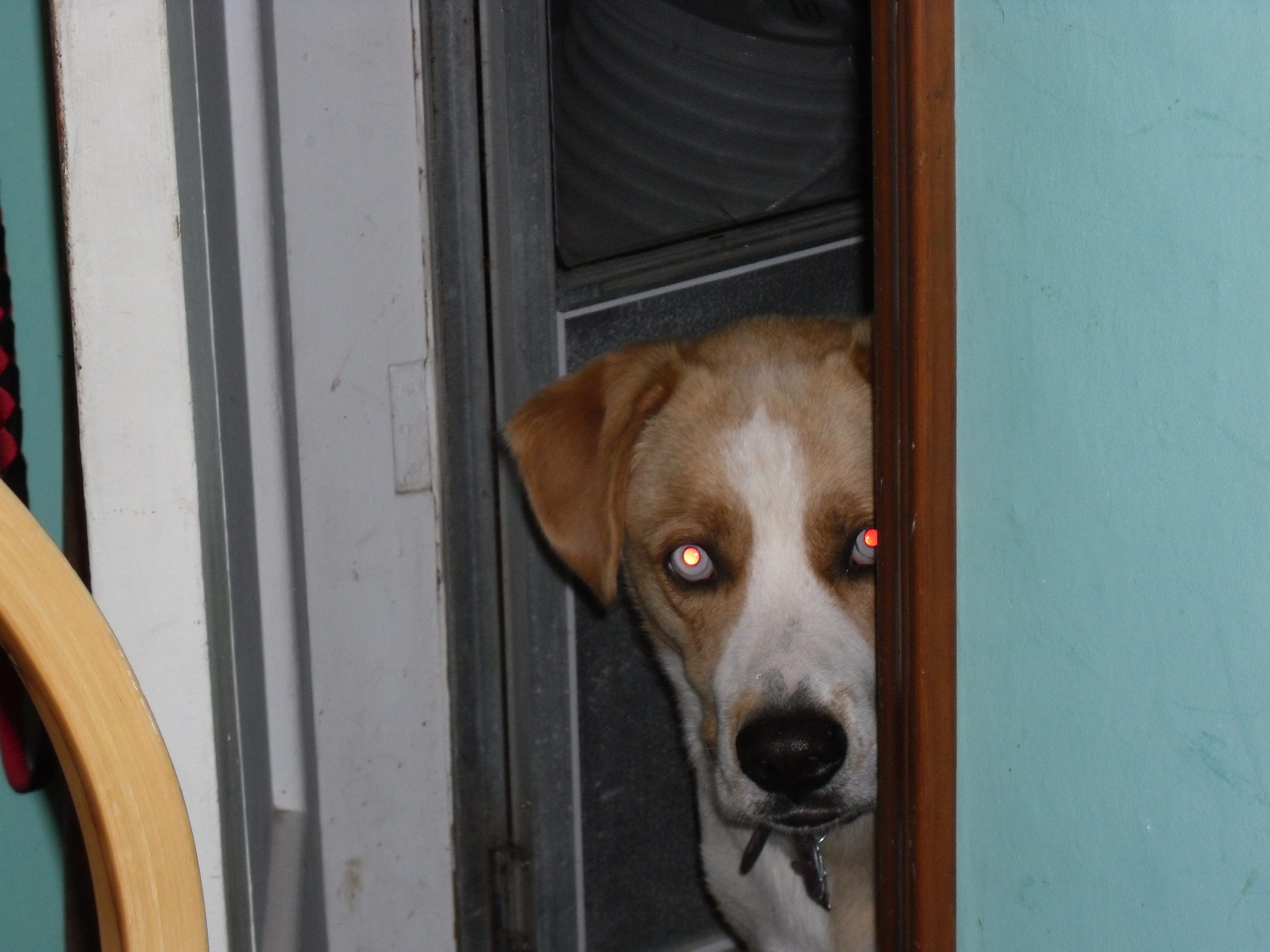 Cobie is a dog who is strangely respectful of physical boundaries.  He’ll lie with you, but not touching you.  He’s been able to jump the babygates I use to restrain him since he was nine weeks old, but he only ever did it once.  If he leans against a gate and it falls over, he still won’t go through.  If he’s out and wants in, and the door is only slightly ajar, he waits (and moos) until someone opens the door all the way and invites him in.

My Sheldon dog.  Here he is waiting to be invited inside.

He took another bone outside.  I fetched it and put it also on the table.  Then there was one.  And then that one got kicked under the sofa, as dog toys sometimes do.  And the next time T-Moth came home, Cobie mooed sadly and gazed at the two bones on the table, but he wouldn’t take one.  They were right there.  “Go ahead,” I said, because I happened to be sitting at the other end of the sofa.  “Get the bone.  It’s ok.”

But he wouldn’t do it.  So, because it was easier, I bent over and fished the third bone from under the sofa and handed him that one and he was happy all wigglebutt and helicopter tail.  The routine had not been interfered with.

The two bones are still there.  And if Kelly takes the one remaining bone, he does not seem to care.  Maybe…maybe he considers I am keeping the other two and as long as she doesn’t have them all…  I dunno.  Sometimes Cobie gives me things to “hold” for him.  That’s why I have a piece of corn husk in my pocket even as I type this.  Maybe I am “holding” two bones for him, and the table is some kind of doggy bank in his mind.

But if Kelly wanted one of those bones, she would take it.  Remember the straws?

So last night I came in the office before bed to check and see if any grades had been posted, and before two minutes had passed I heard THUNDER THUNDER THUNDERPAW, click clackety-click, and then CRUNCH CRUNCH CRUNCH.  Even though it’s been a long time since either dog chewed anything illegal (of any importance) I know that noise and I jumped up whereupon silence descended.

I went into the living room where I discovered Cobie lying with my sunglasses between his paws.  He had a look on his face that kind of said, “Hi!”  Mind you, I left the glasses on the end table, my end table.  Behind the lamp.  Behind the bones that have been there for how long now unmolested.

My initial reaction was that the dogs had chewed my sunglasses.  Actually, one lens had popped out.  The other was partially out.  Only the earpieces took damage and that was light.  I put both lenses in right, took them in the kitchen and washed everything in the sink and they’re still usable, if a little mutilated around the earpieces, but my hair will hide that.

I was annoyed as all get out, but not actually angry.  They’re dogs, and I let my guard down.

But this morning I woke up in a fit of certainty.  Kelly stole the glasses, got in a couple-three chomps, and then Cobie took them.  Maybe he chomped them too, but not much because if he had they would be shrapnel now.  I think Kelly stole them because she does that and Cobie doesn’t, and I think Cobie took them because that’s what he does.  And I think  he was watching them.  When I went into the kitchen he followed, because when I command him to give me something and he gives it, he gets something.  He’s very reliable about giving things up, and I am very reliable about rewarding him for that, because some day I might desperately need him to give something up.

So, even though I caught him with illegal sunglasses, both dogs received carrots for surrending them.  No matter who did what while I was out of the room, they both behaved perfectly when I came back.  Maybe I’m messing up, but I don’t think so.  I read somewhere that dogs don’t understand that you can know things happened that you didn’t see, but they completely get that you know what you did see.

BTW, only one grade posted so far, but it’s a good ‘un.